skip to main | skip to sidebar

As I stood at the Philadelphia airport yesterday waiting for all the group's luggage to appear on the carousel, I looked around at the faces of those whom I had spent the last 19 days with and recalled the four who had departed a few days earlier. I marveled at how this trip was a pilgrimage to a place of great history, but also how it was a journey that taught us about what it is to live in "community" with one another, as our group had for over two weeks.

There is so much to process that it will be days or even weeks before I can organize my thoughts, stories, photos and memories enough to attempt to convey the amazing experience that I have had over the last few weeks. If you asked me the highlight of the trip my first thought would be the journey to the top of Mt. Sinai . . . truly an awesome experience on so many levels - the sense of accomplishment, the deafening sound of silence, the majesty of the view from the top, the honor to walk where Moses received the Ten Commandments from God . . . and so much more.

With further consideration the group may list some accomplishments like . . . crossing a Cairo street alone, riding the Metro without group leader assistance, navigating the sidewalks without being "accosted" by the vendors along the way, learning to leave food on our plate without guilt, counting from 1-15 without pausing . . . ask us about these things and we would be glad to explain!

Although we all read about what we would experience in Egypt prior to our arrival, I don't think anyone was prepared for the reality that we found when we were immersed in the society. As a woman on this journey, I was very concerned about being sure that my clothing was conservative enough to not offend the people we would be walking among for several weeks. By the end of the trip, I found myself noticing the way some female tourists were dressed and being myself offended by their lack of consideration for the customs of the society where they were guests.

I thank God for the opportunity to participate in this awesome journey and hope that I will be able to share the experience in a way that will inspire others to want to learn more about our brothers and sisters in the Middle East.

Peace and blessings . . . Stephanie Rhoades
Posted by David D. Grafton at 5:48 AM No comments:

A few images from the Valley of the Kings and Luxor 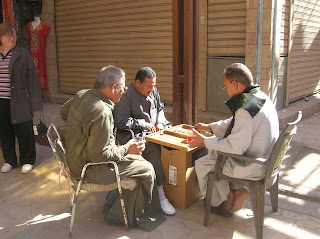 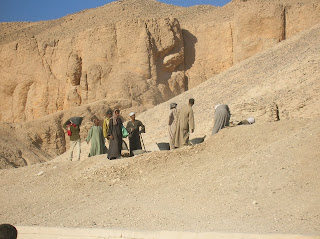 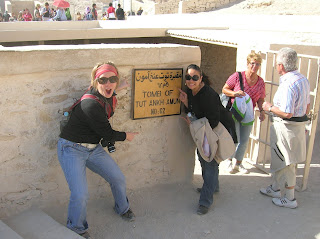 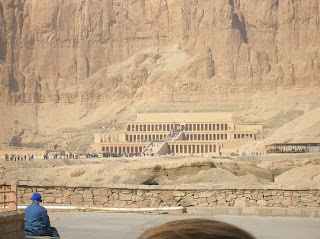 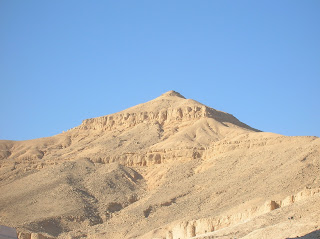 Transitions . . . from one world to another

We've formally concluded our Globalization course. Some of our group has already returned to the U.S., while others have made the trek to Upper Egypt, to tour the ancient capital of Egypt at Luxor. We hope to provide pictures of the Valley of the Kings, the temples of Hatshepsut, Luxor and Karnak when we return to Cairo.

The most difficult times are ahead, however; to transition from one world to another - where life is radically different and world views will be greatly altered.

We hope you have enjoyed our sojourn. We have enjoyed sharing our experiences with you.
Posted by David D. Grafton at 1:10 AM 4 comments:

getting ready to say good bye 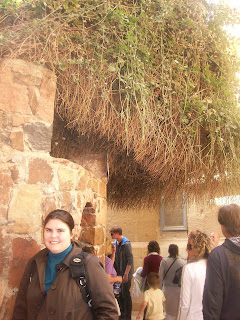 As I spend my last day in Egypt and prepare to go back home to the Untied States several things cross my mind. One is how much I am looking forward to a LONG hot bath and a turkey club sandwich, but other more meaningful thoughts are there as well. I have been so blessed to be on this trip, to spend time with the people of Egypt, and with my fellow class mates here. Many people asked me if I was afraid to come to Egypt, or told me to be careful as this is such a troubled part of the world. We often have so much fear of this area, that we fail to open ourselves up to the good that it here. I think that perhaps the most meaningful thing I will be taking back with me is a new understanding for what it means to live in the Middle East, and what it means to be in an Islamic country. I have fallen in love with the Arab people in Egypt, with their sense of hospitality, their love of their culture and history, their deep faith, and their hope for the future. This is a deep and intricate culture which I could spend a life time studying and still not understand, but being here for this short time and and experiencing this small piece of life in Egypt is something I will be forever grateful for.

Megan Crouch
Posted by David D. Grafton at 3:32 AM 1 comment: 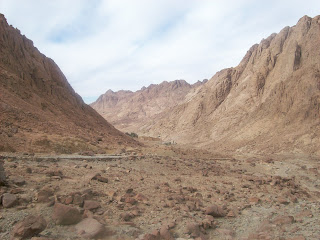 Yesterday we were pilgrims and not just tourists. We climbed mount Sinai! Some impressions of our time there: I will never again be so judgemental of the children of Israel complaining in the wilderness; I have a new respect for moses climbing that mountain several times; I am amazed that people actually live in this Sinai wilderness of rock and sand and gravel that looks so barren and forsaken; I feel a part of centuries of pilgrimage tradition especially after reading portions of Egeria's writings from the 4th century.

Several of us took the stairway of repentance up the mountain. stairway is a very loose term for what we climbed; strategically placed rocks feels more accurate! We were thankful for our guide, Hossein. He was kind and thoughtful, slowing down for our out of shape conditions. On the return trip, by way of the camel path, it grew dark before we reached the monastery. Traci and I, behind the first group, were very thankful to see Hossein sitting on a rock in the darkness waiting to lead us the rest of the way. as we followed him on the dark, rock strewn path I was reminded of the verse in John that was very special to me when my best friend was diagnosed with cancer. "Jesus said, I am the light of the world. Whoever follows me will never walk in darkness but will have the light of life." Hossein didn't have a light but he was our guide, he knows the path and as we followed him single file we could walk where he walked. He didn't walk straight over all the rocks as we had been doing. He walked in the dirt around the rocks because he knew the path and the easiest way to walk.

I was also reminded of the challenge we received a couple of days ago about following Christ. Which Christ are we following, the Christ of christian tradition or the Christ of the Gospels? They aren't necessarily one and the same.

Who is our guide on the path of life? Are we following our guide or are we choosing our own path straight over all the rocks in the way? I want to closely follow the Christ of the Gospels, the light of the world.

Of all the sights and experiences, yesterday's trek up mt. Sinai was one that I will never forget. When we arrived, I wasn't able to keep up with the main part of the group as we walked up the gravel path to the monastery, consequently I missed out on much of the discussion only catching the tail end. After walking around the monastery, I notice that everyone was missing and thought that they had already left to go up the mountain. I wanted to catch up and rented a camel that came with a young boy for a guide and up I went. After about an hour, I realized that I had been mistaken and I found that I was alone on the mountain with only my young guide and my camel. After a few moments of panic, I resolved myself to making this trek on my own.

I found peace in the silence. The only sounds were the breathing and footsteps on the camel and an occasional clicking noise from my guide who walked behind me. The breeze blew my hair and I breathed in deeply. As we rounded a turn, the sun began to peek from behind the clouds and rays of sunshine spread out in the sky. I'd never had such a spiritual feeling. As I looked around, I realized that moses looked as this same view such a long time ago. It truly felt like holy ground. 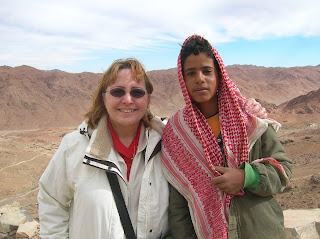 Once at the plateau, I got off the camel and gazed at the magnificent view that surrounded me. my heart was pounding as I realized that I would have to travel down the mountain the way I came up. I was truly frightened and explained this to the man who worked in the little shop at the plateau. He told my guide to allow me to walk in the steep parts of the path, which he did. I will never forget the boy, Oda, and the gentle kindness that he showed to me, allowing me to hold on to him when I felt unsteady. When we arrived at a more flat place in the path, he helped me up on the camel again and off we went. As we progressed down the hill, I met my group traveling up. When we arrived at the bottom I was sore, but felt a sense of exhilaration. It was like my personal pilgrimage.

Leaving for the Sinai

We leave for the Sinai tomorrow. We will travel along the pilgrimage trail of the 4th century pilgrim, Egeria to St. Catherine's Monastery. On Wednesday we will visit the monastery, the original home of the Codex Sinaitcus, before climbing Jebel Musa - "the mountain of Moses" where tradition holds Moses received the ten commandments.

We will be back in Cairo Thursday evening - hopefully with lots of good pictures!
Posted by David D. Grafton at 1:31 PM 1 comment: